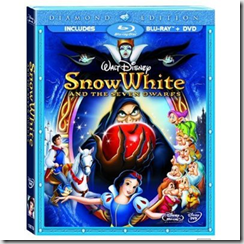 In this era of video on demand and high-speed connections to the Internet, no to mention the specter of wide-spread piracy, Disney’s little only-sell-our-famous-movies-every-10-years marketing gambit seems even more tired than it always has. That being said, Disney has released the move Snow White onto a "high definition digitally re-mastered" DVD edition. Frankly, 90% of the world just wants to be able to let their kids watch a nice movie, but, if your marketing guys tell you to make a big deal out of all that stuff, go nuts.

The downside is that the Snow White DVDs can become overpriced very quickly depending upon where you buy them. Disney is mass advertising its two-disc Blu-Ray / DVD combo package of the Snow White movie. Under normal circumstances, such a box set would beg the question, why would most people want both the regular DVD and the Blu-Ray DVD? If you already have Blu-Ray, then why would you want the regular DVD? If you only have a regular DVD player, then what use do you have for the Blu-Ray DVD?

The answer, most likely lies in the fact that the executives who run the Disney company have proven themselves to be not the most forward thinking people on the planet, over the last several years. They no doubt believe that the world will continue to abide by its release-once-a-decade shenanigans just as they have in the past. The fact that there was no Netflix or other rent anywhere systems the last time they used this playbook, hasn’t crossed their minds. After Snow White goes "back in the vault," millions of people will now find it very easy to rent.

Nor, has Disney considered that while most people choose to acquire their movies legally, that when faced with the choice of not being able to buy the movie because it isn’t being sold, or downloading a copy off of the Internet, people are going to be very willing to make an exception.

In other words, this "going back in the vault" bit isn’t going to work anymore, but Disney hasn’t realized that yet. Releasing this multi-pack means that IF Blu-Ray ever does become the DVD format that everyone has in their home, the people that bought the Snow White DVD will already have the Blu-Ray copy in the box waiting for the day that new DVD player shows up.

What does this all mean to the Undefeated Daddy?

My three-year old daughter will no doubt want to see Snow White someday. Frankly, I want her to see it some day. It is part of the national lexicon, and frankly, it’s a pretty good movie, too. Even if she isn’t interested today, it’s only a year or two away, so I figure I might as well buy it.

But, I’m not paying some big price tag for a half-century old cartoon even if it does come as a Blu-Ray combo pack (ESPECIALLY if it comes as a Blu-Ray DVD combo pack). Defeated? Hardly.

Fortunately, there are plenty of good deals going around on the Snow White DVD release. Some of the best deals involve Internet coupons coupled with a low-price on an Internet retailer like Amazon’s website. Add these together, and that is a price I’m willing to pay for a product I am willing to buy. Winner!

As of this write up, go to Amazon.com (click the link above, it takes you right there and I think I get like 22 cents or something if you buy it 🙂 and add Snow White to your cart. It should be $19.99.

Then, use the coupon code SNOWHITE (only one W) and it should take $10 off.

Bam! Get the Snow White Super Deluxe Mumbo Jumbo Remastered Special Double Disk High Flying Whiz Bang Edition for $9.99. Buy some other stuff to make your total order $25 and you get free shipping. (If you don’t need anything from Amazon, then buy something you will need for sure later that doesn’t go bad like reams of paper, toner or printer ink, or whatever.)

Don’t anticipate an upgrade to Blu-Ray soon, or already have Blu-Ray? Wait six months and sell your extra DVD on eBay. You won’t get a lot for it, but you might make your money back.

FYI, if the coupon code above doesn’t work for you, or it has expired by the time you read this, use this search engine to find the latest Snow White DVD deal chat at the online deal websites that I use for most of my stuff.